Ruby in the Rubble submission by Laura Castree 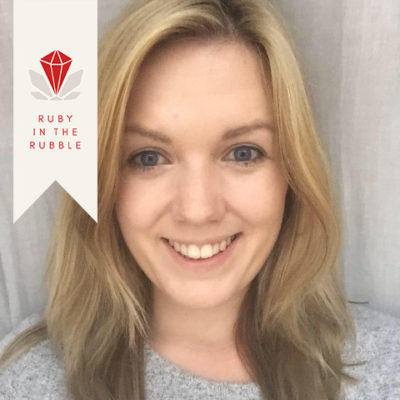 How do you eat an elephant? With a knife and fork.

A note from Anna: Perfectionism can find us inactive, halting moving forward because the cost of getting it (whatever it may be) wrong in some way, is high!  For many who struggle with procrastination, the issue is less often laziness and more often the fear of failure. A task can feel so insurmountable when the desire to do it perfectly is strong. I absolutely love Laura’s story of how a simple question has become a weapon with which she repeatedly breaks through this barrier of stifling perfectionism.

From a young age I have been aware of two warring factions within myself, which so often are forced into uncomfortable co-existence in those they afflict: ambition and perfectionism. I never wondered how exactly I inherited this particular mixture of blessing and curse; I grew up in a home which was the product and reward of my father’s incredible ambition, which was anchored by my mother’s loving perfectionism. Seeing what these two traits had done for my parents and for me meant that I never once considered that they would be difficult to manage when combined within one individual.

In reality, it has taken years for me to harness and manage these impulses. School days are, of course, the best of our lives, but for me they often proved overwhelming. I adored writing, but a word limit often stretched out before me as a seemingly insurmountable challenge. I spent evenings crafting vivid and wonderful futures for myself, and found myself horrified at the thought of the impossible feats required to achieve them. This ebb and flow of ambition, so often stalled and defeated by perfectionist anxiety, became more of a burden than a blessing.

In the height of one such episode, I remember being stopped in my tracks when some unfortunate unpaid therapist of mine posed the question that would change my life: “Look. How do you eat an elephant? With a knife and fork.” I wish I could say that I remember the date, particular meltdown and wonderful individual who gave me this gift, but unfortunately it is only the memory of this phrase which has endured. The first remarkable impact it had was to force me to pause, frown, and then laugh. I am now a teacher of secondary school children and this is still a moment I truly adore. I have deployed this phrase to pupils gulping down sobs after friendship breakdowns, hyperventilating before exams, and proclaiming that they are simply unable to process German grammar. The first gift offered by this phrase is that it forces the recipient to stop, think, and breathe, like the moment’s respite you experience when passing under a bridge in the pouring rain.

The second miracle in this simple phrase, is that it begins to transform a perilous mountain pass into a series of familiar stepping stones, and to transform our journey into a sequence of one foot after the other. I have personally never endeavoured to eat an elephant, but I am generally proficient in the use of a knife and fork, and as such already possess the tools to contemplate such a mammoth task (pun intended). When we think of overwhelming tasks we tend to envisage them in their towering, terrifying entirety, like the notion of eating an elephant in one mouthful. In reality they are so often comprised of a sequence of smaller bites which may take time and grit, but are certainly within our grasp. At one point several years ago I found myself in a position where I was simultaneously applying for teacher training programmes, selling my first home and buying another, studying an advanced French course in the evening and working full-time during the day. Whilst I wouldn’t recommend this to anybody, it was made possible by my miraculous elephant mantra; if I had taken a step back to look upon the situation I would most likely have failed, but instead I planned and lived in week-sized portions and somehow emerged victorious.

For me, the elephant has taken different forms over time. My inherited blend of ambition and perfectionism often produces elephants of my own making, as above, but it also makes our current, inescapable situation very uncomfortable. The indefinite expanse of time spent in lockdown stretching out before us is an elephant in itself; a parallel universe where ambitions are simply on pause and perfectionism is often beyond our grasp. I have friends who are home-schooling whilst breastfeeding for whom the routine of every day is an elephant, and I have family in the process of grieving who cannot even envisage the size and scope of theirs.

Whilst we are all experiencing our collective trauma very differently, what we all have in common is our knife and fork. Some days we pick them up with relish, and others with a sigh, but we pick them up nonetheless. The final gift of my lifesaving phrase is the promise it makes that you can, and will, eat your elephant. It might take months, or years, and you might throw down your knife and fork one day only to retrieve them the next, but one day you will accomplish the feat which once seemed simply too gargantuan and absurd to contemplate. How do you eat an elephant? With a knife and fork. 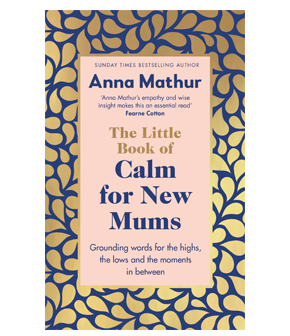